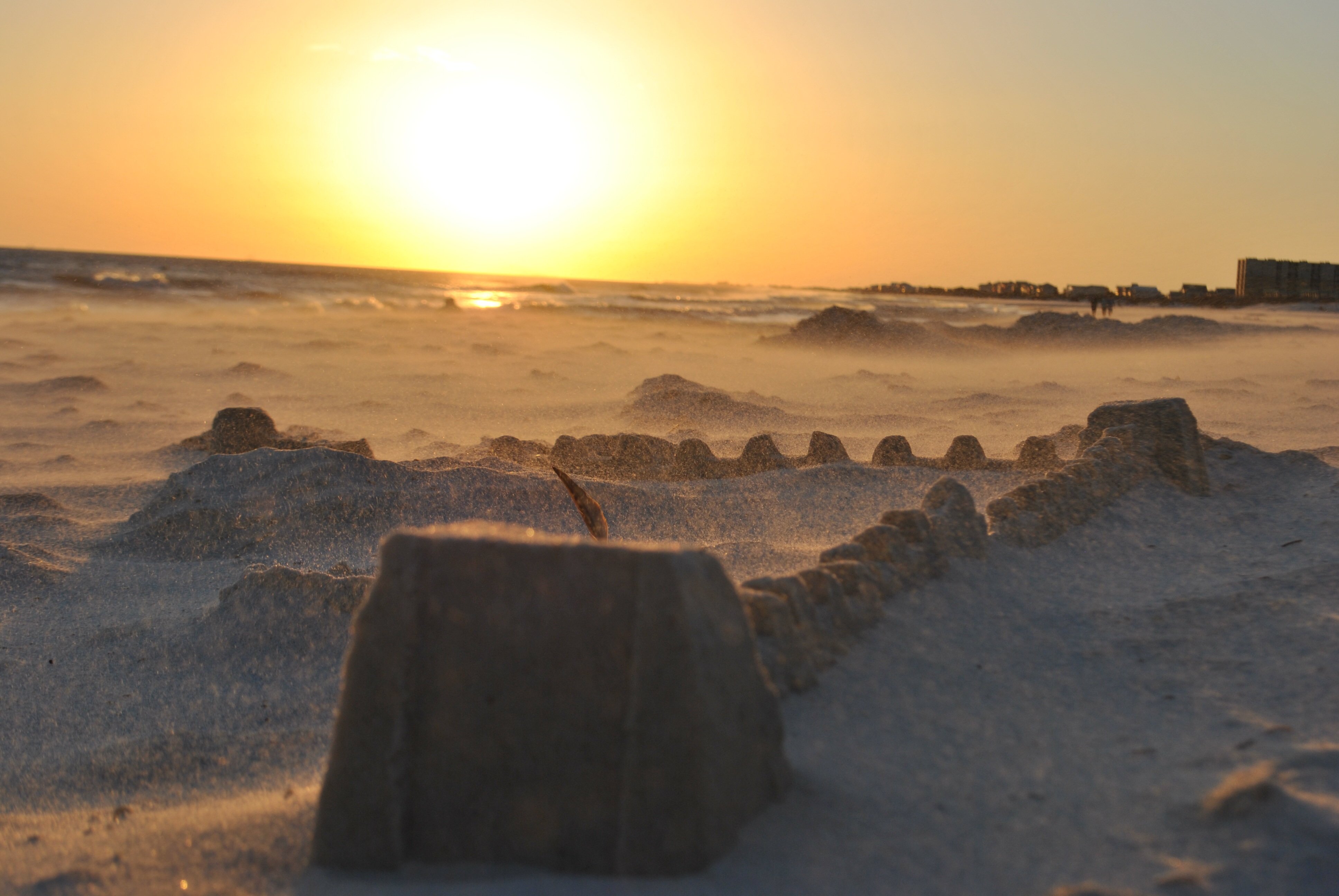 I love children's sandcastles. I took this picture on a sunset stroll with two of my daughters on a family vacation in Gulf Shores, AL. We spent several days just hanging out on the beach and doing fun stuff.

A beach draws a lot of families because parents can get some sun while kids play right in front of them.  Kids get lost in building sand castles, finding shells, and swimming.  This sand castle drew our attention.

Children don’t have the cognitive development like adults yet to talk about what’s going on for them so instead they play out their many thoughts and feelings.  This can be frustrating for us parents because our kids act and react sometimes in ways that we don’t understand.  This causes us to react in ways that later we regret or just feel like we missed the mark.

As disorderly as some kids appear it feels good to them to bring order to their world.  As an example, this particular child might have woken up in the morning thinking and planning what they would do on the beach.  They anticipate and hope.  They might even escape the condo and run down to the sand they are so excited.  This unsuspecting plot of sand  becomes an emotional place – a place to bring order to their world.  Bringing order can be important when children feel like part of their real world is out of order – fights with siblings, problems at school, difficult times at home.  In play it brings a sense of completion, like, “the world is ‘good’ now.”

I also noticed the razor straight parapet between the towers and how they were the same length and design.  Sand castles, forts, building things around themselves – these seem to indicate a need for comfort, safety, protection.  It does feel good to be secure.  Kids feel all kinds of threats in their world.  Things others say to them at school, fear over trying new things, not wanting to change their favorite routines.

Kids often use just what they have.  Improvising.  Three simple buckets became the forms used to create this fortress:  three large anchors, the long low parapet, and what appeared to be a single domed mound in the middle with maybe an opening… was that a gate?  There may have been scores of imaginary people coming in and out of the gate by that special dome.  This fortress may or may not be finished.  Which brings up another great observation.

Sand is a nurturing medium for people, especially children.  The motion and act of shoveling, sifting, pouring, and packing sand is therapeutic.  Picture this child having an hour-long massage.  Their feelings “worked out” it was now maybe time to hit the water or go get a popsicle.  The needs for order, planning, security were met.  The great thing about sand is that it allows you to control it.  You can make just about anything with it and then crush it down.  Children need some sense of control in order to develop self-control and the freedom to build something gives children some control over their world.

Finally, things need honor to be noticed.  The seagull feather flag.  Like a signature it shows pride.  “Look at me!”, it cries.  “I made this.  I did it”.  This is so critical when children feel like they haven’t been noticed for very much.  It shows pride, taking satisfaction in what they built themselves.

Take away:  How do your children play?  Do you see any of these themes of order, security, and pride?  How can you let your child see that you notice their play?