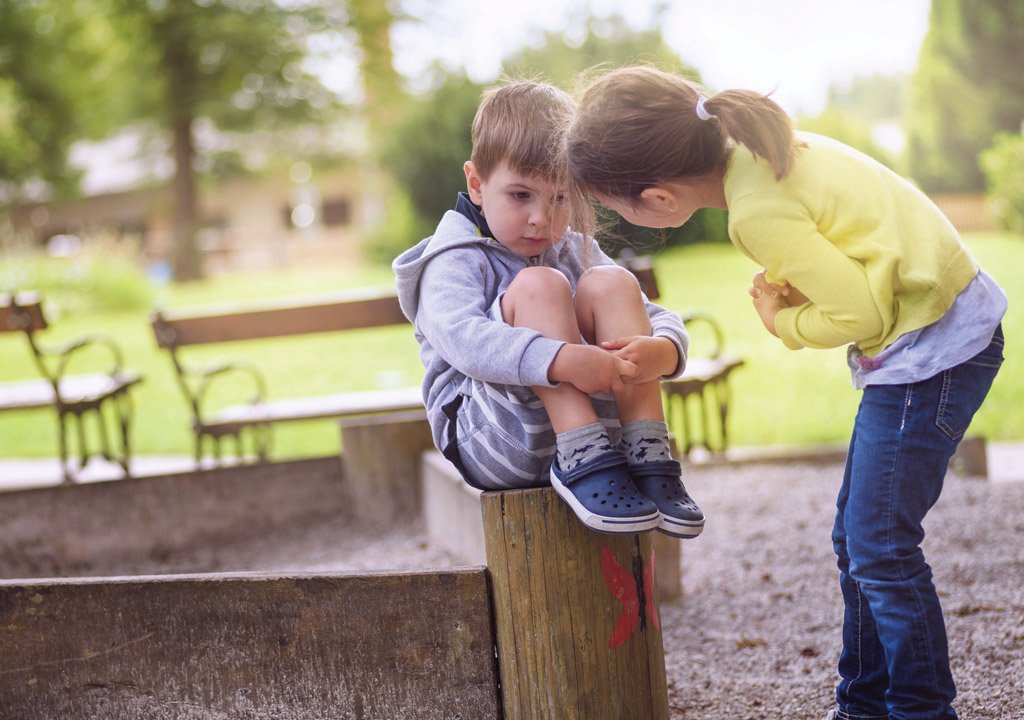 Developing Empathy in Your Child

Developing Empathy in Your Child

By Dean WisdomSeptember 12, 2013 No Comments

About this time last year I noticed two of my daughters (ages 6 and 4) getting into arguments with each other more than usual. It disturbed me to see the accusations, hurt feelings, and fighting for personal turf over everything from toys to places to sit at the table. My attempts at correcting did not seem to help. It was like there was no empathy left in their relationship and this caused me to think about what I could do to help their friendship.

Empathy only occurs when perception about the other person has changed.  When you change perception you change behavior.  If a child perceives another child to be a nuisance or threat then the natural result is to treat her that way.  The challenge parents face, however, is that we have a tendency to verbally instruct our children (e.g., “You shouldn’t treat your sister that way, it’s not nice”).  Younger children need to be shown what we mean through our actions because they register the information through their feelings.

By our mid-20’s adults have fully developed executive functions (the prefrontal cortex and left hemisphere).  Children have a developed limbic region at birth and are right hemisphere dominant the first three years of life.  The limbic region processes sensory and motor information from the body and facilitates regulation of emotions.  The right hemisphere is attuned to non-verbal communication, feelings and body senses.  This is why play, rather than logical reasoning, is the primary means of expression for children.  So, I began to play with both of my daughters at the same time uninterrupted each week for about 45 minutes.

The first playtime was difficult.  Within minutes the same pattern emerged – fighting over toys or closeness with me.  Instead of intervening I made reflective comments equally to both.  “Sounds like you both want the same thing,” “She wanted to play with that and you decided to grab it first, that made her sad.”  “You both want to use that toy; I wonder if you can both come up with a solution.”  I also set appropriate limits such as not allowing them to hurt each other physically or taunt each other.

One thing I noticed is that the worse the conflict became then the special playtime with me became more difficult.  But then after a few weeks something started to happen.  They began talking, coming up with sharing solutions, and taking turns.  My reflective comments followed, “Looks like you both figured out how to share that,” “That makes you happy to let her go first.”

After about 6 weeks they were both working on separate paintings when they each painted a picture for each other with colors each liked and put each other’s initials in the painting.  After this they began calling each other “play buddies” and it impacted their behavior in the home.  The fights were replaced with cooperation and empathy.

One reason this kind of play is helpful is that they hear the parent comment on the other child equally as they do on themselves.  Kids that hear their parent comment, “That is frustrating” as the child cannot manipulate a toy a certain way to get it to work somehow register in their brain and body, “Oh!  I guess that’s right, I am frustrated.  So that is what this feeling is.” And so, their perception of themselves changes and their self-understanding grows.  This naturally follows with the sibling.

So when they hear the same comments directed toward their sibling then their perception of them grows and changes too.  Now it becomes, “Oh!  He is frustrated also.  He is excited, he is angry.”  Once the perception changes they begin to sense and feel the feelings and senses of their brother or sister.  As children cooperate with each other they naturally feel less threat.  And when calm they have better intentions and also naturally anticipate the intentions of each other and adjust their behavior to keep on cooperating.

Now it is no longer rewarding to argue because it feels better to play together.  Instead of threat there is cooperation and empathy.  The parent is a critical factor in facilitating this.  They need us at times to help them.